Since a few weeks the new Android 2.1 (!) running phone is available in some countries (US, Germany,HKG, Singapore) solely by mailorder from US . I saw some shops in selling it in Sim Lim (not according to Google’s “law” though). I can dive straight into Eclaire hacking now.
Hint: The docking station comes optional. If you order it, you wont need the additional power adapter, it comes with one. Also the USB/power plug is different to the previous htc developer phone (aka G1) !

Some pictures from the box opening ceremony:

Google Nexus One - Whats in the box ? 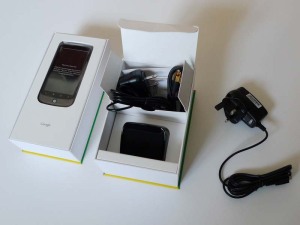